Wienie Will
From the beaches of Southern California (El Segundo) ~ through a fifteen year stint as a Russian Linguist in the Air Force (travelling the world & drinkin' the beer) ~ to a computer gEEk in Baltimore, Maryland.

Create a hot dog "chili sauce" that's uniquely my own and that I'll prefer over any other available chili sauce...

Now, I know that I'm not the first one to assume such an undertaking (generations of Greeks before me can lay claim to my goal) - although I'm sure it's rare that someone verbalized it this way - setting it as a goal of the new year... (or maybe it's not rare...)

Living in Baltimore, I'm in a veritable desert of chili sauces. The chili sauce capitols seem to be Flint or Detroit, Michigan - Chicago, Illinois - or various locations in New Jersey (Paterson & Plainfield being notable)

Several words of clarification may be in order...

By "chili sauce" I mean a ground beef-based, fine-consistencied (not "chunky" Texas-style chile), somewhat mildly seasoned sauce - (again - not confining myself to the spices used in traditional Texas chile) for use atop a frankfurter.

So first, I had to come up with a recipe.

Since this is a work in progress, measurements will be "by the seat of my pants".

I'll be starting each of my attempts with 2 pounds of ground beef - and going from there...

Sitting here, I realize I should have started this yesterday - maybe even the day before - to let the flavors "mature", but... What the heck, I've got the rest of the year to figure it out.

I've seen a lot of recipes that call for cooking 2 pounds of ground beef in 1 quart of liquid. Several recipes I've seen call for using beef broth, beef consomme, reconstituted beef boullion (whatever you want to call it) so I decided to use 2 cups of water & 2 cups of beef broth to arrive at the quart of liquid.

Well... We know that there's going to be chile powder, cumin & cayene, but... how much?

Most recipes seem to call for 1/2 to 1 tablespoon of chile powder ("regular" or "hot") per pound of beef. I've decided to split the difference. 3/4 tablespoon hot Mexican chile powder...

Cayenne doesn't add a lot of flavor, mostly heat - I like it warm - I'm going with 1/2 teaspoon per pound of beef

I loved my first exposure to Skyline chili and have decided to go the "Greek" seasoning route - i.e. allspice, cinnamon & unsweetened cocoa powder.

The use of cocoa powder in some Greek-style chili sauces intrigued me. I've always been a fan of mole - which has a fair amount of cocoa in it (Mayan fare from the Yucatan Peninsula) and figured - if I like it on chicken or turkey, why not try it in "my" chili sauce.

I saw a recipe that called for one bay leaf per pound of beef. I like bay leaf... Done!

Apparently, I should have an "acid" component - I go with 8 ounces of plain tomato sauce per pound of beef, 1/2 teaspoon of Worchestershire sauce (I've seen it in several recipes, and I like it...)

Also, about 3/4 teaspoon vinegar per pound of beef. I wish I had red wine vinegar, but I don't - so I go with plain, white vinegar.

Salt to taste - and a couple twists of the pepper mill.

1) In a large, deep frying pan - brown the beef in the beef broth & water with the onion & garlic
2) Add the rest of the ingredients
3) Simmer for as long as you like 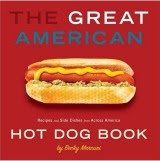 For Christmas, my wife got me a copy of The Great American Hot Dog Book by Becky Mercuri (copyright 2007).

One can imagine that with a web site named "WillsWienerWorld.com", I immediately tore into this tome and began to "devour" it's contents (pun intended).

Becky's writing style is easy to digest (ok... I swear... not too many more puns...), but she's a food writer whose job assignment was to write a book about hot dogs, and not truly a hot dog fanatic. It'll be interesting to see if that has any impact on the book...

On the other hand, her research seems to have been very thorough and she hits the high points nicely.

For 2010 I decided I wanted to add a blog to my WillsWienerWorld.com domain. And this is it...

Since I created this blog the day after Christmas - I hope everyone's Christmas was merry. And I'm hoping everyone's New Year will find them happy & healthy!
Posted by Wienie Will at 10:27 AM No comments: